Community Energy Club is an oil buying club bringing together the collective buying power of domestic, community and business heating oil users across the South West. 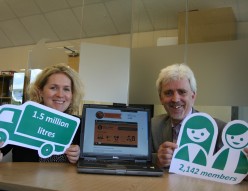 Community Energy Club, the oil buying club run by the local energy charity Community Energy Plus, has reached a double milestone of signing up more than 2,000 members and ordering over 1.5 million litres of oil.

Celebrating its second anniversary this September, the club was set up to in response to rising heating oil prices.  It brings together the collective buying power of domestic, community and business heating oil users across Cornwall and West Devon to provide members with a simpler way of purchasing their heating oil at a competitive price.

Since its launch the club has placed over 2,400 orders on behalf of its members over 24 buying dates. Nicola McCheyne, Project Delivery Team Manager at Community Energy Plus, explains the value of the club to its members: “Rising energy prices are putting considerable pressure on householder’s finances but many people don’t realise the benefits of shopping around.  Our members are currently saving an average of £65 a year by ordering through the oil buying club but we know that some of our vulnerable members who are unable to call several suppliers are saving considerably more.  The collective savings made by members is now more than £43,000 and we look forward to saving local residents even more money as our membership increases.”

Community Energy Club has recently launched a new mobile-optimised website in response to its member’s needs.  Nicola McCheyne continued: “We know that people are leading increasingly busy lives so our new site enables customers to order on mobile phones and tablets, this makes the process even easier for them as we do the shopping around for our members so that they don’t have to.”